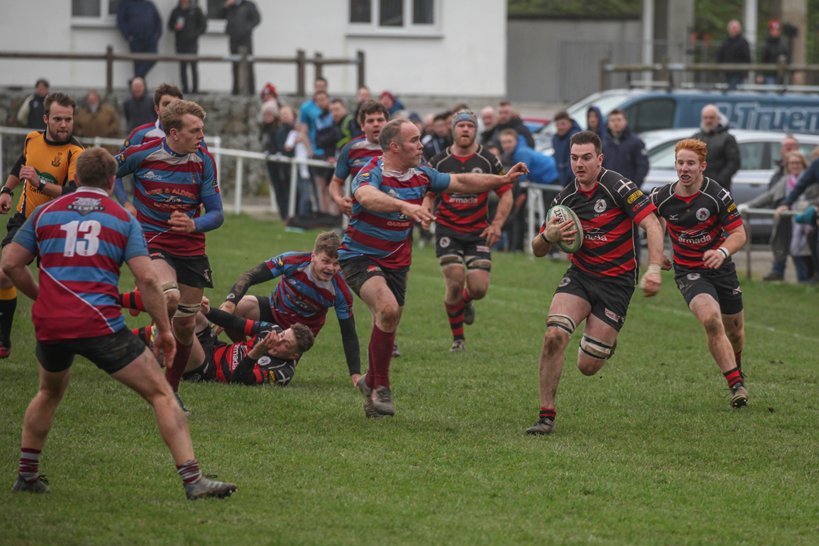 It remains advantage Penryn in the race for promotion and the Cornwall/Devon league title, despite a stalemate against fellow challengers Bude. With just five games remaining Penryn’s destiny is very much in their own hands and they still lead Bude by four points, although the dropping of points bring Honiton right back into the picture.

Penryn are unbeaten in the league in 2019 and so too keep their unbeaten home record for the season intact, but they needed a last gasp try from Josh Chambers to secure a draw even though they could well have snatched all four points. Contests between the two sides are often tight and physical affairs and it was to be no different on this occasion. Bude inflicted one of only two defeats this season on Penryn back in November and the Borough had the opportunity to gain revenge in the best possible way, by extended their lead at the top of the table.

The showdown between the top two in the table brought a large crowd to the Memorial Ground and despite not being treated to any overly flowing rugby, there was entertainment and drama aplenty. Penryn had a strong wind at their back in the first period and were unsurprisingly dominant in the early exchanges. It would have been interesting to see the possession and territory stats in the first period, especially in the Bude 22, but try as they might Penryn couldn’t find a way through despite a mounting penalty count for the away side.

There would have undoubtedly been some sore bodies from both sides on Sunday morning, as two hefty packs collided time and again, but the home side would find joy in the wide exchanges to finally break the deadlock. A try looked destined for several phases, but with another advantage being played the home side whipped the ball wide from the free play and Josh Chambers continued his rich vain of try scoring form to dart over. Tomas Townsend’s conversion hit the post in what was the only points of the half.Much like Penryn dominated possession and territory in the first half, the visitors came into their own after the break with conditions in their favour. The bulk of the Bude pack was beginning to tell, as they piled forward in search of a levelling score. They eventually got just that, despite Penryn protestation and in a double blow they lost skipper Grant Randlesome to the bin from the resulting try. Bude also missed their conversion to leave the score at 5-5.

With the scores level and so much at stake, it became a nervy and error strewn contest, with both teams searching for a crucial winner. Arguably a draw suited neither side despite it being less damaging for Penryn, but then disaster struck. The home side went in search of the match winner only to see the move break down and the ball go loose, with Bude streaking away down the touchline to take the lead. Another conversion went awry, but 5-10 looked a difficult lead to overturn in the conditions.

There was to be late drama however and plenty of it! Messrs Hughes and Jones both made eye catching line breaks to fire up the home crowd and with Penryn deep in Bude territory, the visitors once again cynically infringed and were this time punished with a yellow card. Penryn hammered away receiving another penalty and some smart thinking from Chambers saw the make shift scrum half take the quick tap and dive over with a minute left to level the score. Townsend could have won it, but his kick sailed agonisingly wide meaning a share of the spoils. Both teams will no doubt be disappointed, but the Borough are still well placed to finish on top of the pile but will have to win their remaining fixtures with some tough assignments, starting at Liskeard on Saturday.