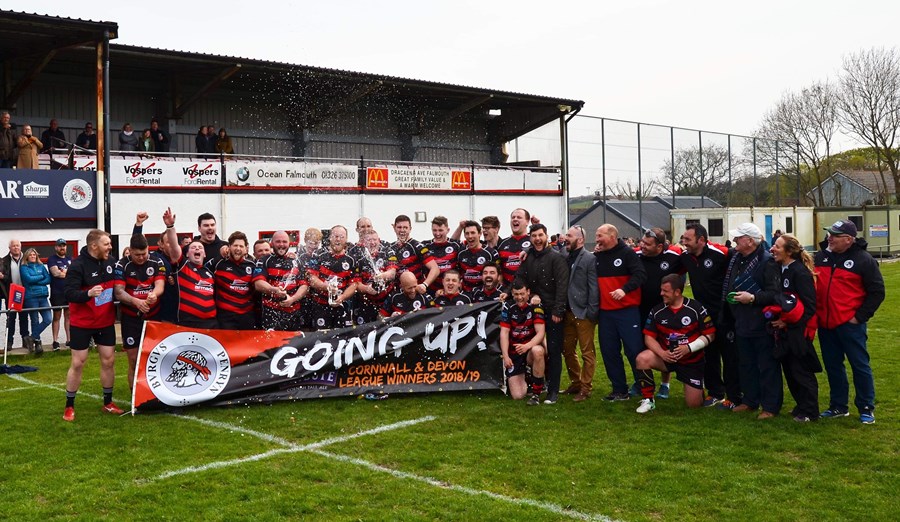 Penryn are champions! The Borough will be playing their league rugby in Western Counties West again next season, after securing the Cornwall and Devon league title with a thumping ten try victory over fourth placed Plymstock Albion Oaks. After confirming promotion last week all eyes immediately turned to this fixture from a Penryn standpoint, as the rare chance to secure a league title in front of home support drew into focus. It was a victory that had all the hallmarks of what had already brought Penryn promotion - flowing and clinical attack, strong set piece and tenacious defence.

A packed Memorial Ground roared out the home side and it seemed the occasion got the best out of the Borough early on. Kyle Gratrix burst down the touchline after only 4 minutes to give Penryn the lead and send the home crowd into delirium. Tomas Townsend added a second just four minutes later, converting his own try to put Penryn very much in command. Before the game had hit the 30 minute mark Penryn had already secured yet another try bonus point, thanks to converted tries from Adam Hughes and Josh Chambers. Oaks hit back briefly to put the champagne on ice, with a converted score before the break making it 26-7.

In truth, Penryn never looked in any real danger and when Chambers added his second (converted by Townsend) just four minutes into the second half, the party could really begin! It was a question of how many now and with the home side wanting to entertain, they turned on the style to bring home the title. There were a brace of tries for both Sam Hitchens and Tom Wallace, as Chambers also completed another fine hat trick to finish as the clubs top try scorer this term. Townsend kicked four of the five conversion as Penryn again racked up over 60 points.

As the full time whistle blew the celebrations could finally start and the Borough could celebrate what has been another fantastic season. Big credit must go to everyone at the club, but specifically the coaching staff and the players who have been absolutely superb. An exciting season lies ahead in Western Counties come September - bring it on!